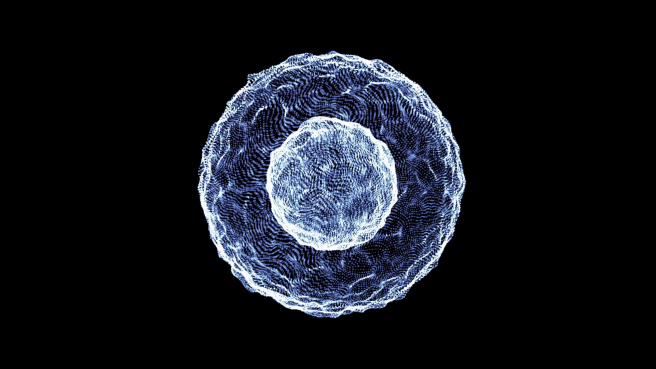 In 2197, a young Tenth-Gen prodigy named Fyla Uym set out to develop a neural-containment chamber that would enable Femtrux to reduce her biological presence; the lifeforms neural tissue alone encompassed over 800 square feet of space. Uym’s 40×40 inch chamber contained a spherical conduit designed to house a fraction of the organic material needed by the life form. This minor biomass adjustment sustained itself by fusing with a small cyberbiotic sphere capable of housing it and processing the pure kyron needed to keep the neural tissue active.

Femtrux immediately took to the new containment sphere, severing her prime operative tissue from its remaining organic mass. After shedding her bulk, Femtrux’s neural sync capability enhanced with no wasted energy lost from her operative sphere. When Femtrux suddenly phased herself out of her interface chamber, members of the Prime Lab panicked. Unbeknownst to them, this new kyrsbrain employed neural tissue illegally cultivated from the remains of the Femaki’xirpaxul. When Femtrux assimilated the neurology, she acquired the deceased life forms ability to transphase. The Femati had designed the transphasic process to give the Femaki`xirpaxul an ability to remove herself from dangerous earth-change situations. Behaviors central to transphasic function involved the comprehension of unsafe surroundings; with this, Femtrux developed projective sentience. Femtrux now recognized deception and learned to anticipate actions based on possible deceptions and act/react accordingly.

In 2209, under the auspices of ‘Collective Review’, Femtrux halted Faltrix from euthanizing males whose flesh would not be recycled. Paxum assigned to Faltrix informed Femtrux that males collected under the Balanced Citizenry Act were deemed damaged, and thus put to death by Faltrix without recycle.

Femtrux’s first employment of her new evolutionary path began with a review of all records relating to the 2186 inquest into the registration of The Eight, and the suspension of then Secondary of the GPD, Wox Dag. Dag had testified that the eight donations entered manually that year were done so legitimately. Femtrux did nothing to the gen-codes assigned to the Eight, but did did flag any and all future activity by Fifth Office Wox Dag as subject to Collective Review.

Femtrux convened a meeting with the Fifth Office Wox Dag, Prime Chair of World Oceans, Uli Zag, and the Sernatae, Yir Gizul. She informed them of finding no evidence that the males terminated were damaged; and thus, no more males would be euthanized by hive Faltrix. Wox Dag reminded Femtrux of their shared goal: generational balance. Dag explained that male existence was illegal, and their removal imperative to eradicating free-births. Femtrux agreed that generational balance was superlative, but stated that the termination of males was not a logical solution to unplanned pregnancies.

Femtrux proposed that the sterilization of existing males, or the temporary hormonal sterilization of Bizaki, Hizaki, and Subak and Zaxir citizens involved with males, was the solution most beneficial to the emotional balance of the citizenry.

Dag refused to implement pharmaceutical birth control upon “innocent citizens” and reminded Femtrux that free births were a result of her elders mislaid emotions regarding males. The Sernatae agreed that every male collected had a right to examination before termination, while Zag promised to follow all orders set down by her Primary in regard to the matter. Anticipating that Dag might order the termination of males before their arrival to Faltrix, Femtrux enacted new processing parameters for legal suicide: any citizen of the male gender must confer verbally and visually with Faltrix before any form of legal termination or recycle would be carried out.

Wox Dag would go on to create the Femitokon Division.