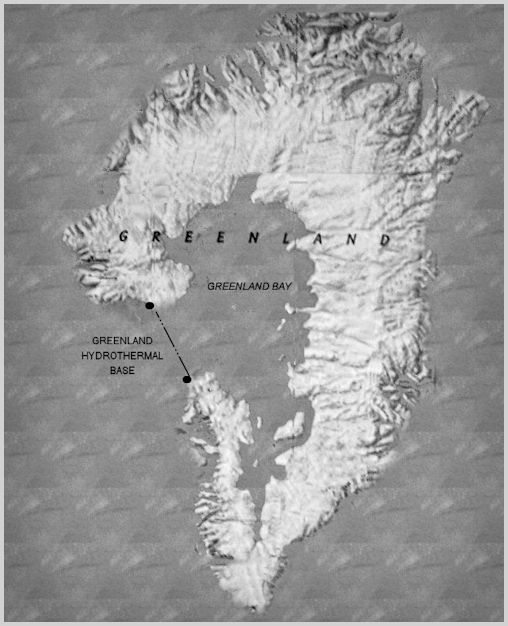 Hydrothermal Turbining (not to be confused with hydroelectric turbining) is the pulling of hot water found beneath the oceanic mantle for pumping into an established oceanic current where such dilution occurs without altering the natural flow of the current.

Greenland Hydrothermal began as a World Oceans station created by the Second Ramaxian Gen, to facilitate the construction of a central base in the North Pole (Ramaxatae), and to oversee the disbursement of radiation-free water, from Greenland’s massive internal bay. Troops had been deployed in greater numbers after ships from North America fired upon ships from the African Trisect in an attempt to control Greenland’s the large freshwater bay.

Twenty years troop placement, a diplomatic delegation led by Fifth-Gen Committee Member the Second, Laxum Wram, sailed up the Congo Strait of the African Trisect and landed in New Rome. She addressed the nation’s Parliament and proposed that Ramaxia could reestablish balance to meridional overturning circulation, by restoring salinity to what helovx called, the Gulf Stream Current.

On Yulitat 22, 2117, the process to restore salinity to the Gulf Stream Current began when Femarctic geoengineers  blasted the volcanic mountain, Iceland Peak. Tearing apart the submerged mountain caused the bedrock connecting it to Greenland’s coast to collapse and create a natural seafloor trench at the mouth of the Greenland Bay. Here, hydrothermal turbines began pulling hot water from the trench, for sluicing into the Gulf Stream.

The severe hurricanes that had plagued the helovx-named Atlantic since the mid-21st century were reduced and became stabilized into seasonal warm-weather storms by 2130. A predictable storm season allowed helovx to trade by sea and quickened the refreezing of the Ramaxarae’acarol (Arctic Ocean).